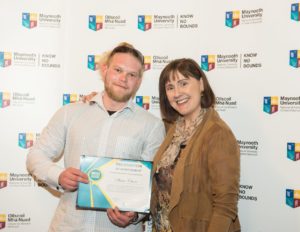 Two PhD scholars in the CMHCR were recently awarded MUSE 2019 awards for their extra-curricular contributions toward, and engagement with, the wider community. Shane Owen (extreme left hand side of group photo) was awarded a MUSE award for Achievement for his work in reaching out to disadvantaged young people in schools, whilst Maria Gialama (extreme right hand side of group photo) won an (Advanced) award for Excellence for her work with refugee young people. Other students and graduates from the Department of Psychology also won MUSE awards, including Siobhan Wray and Elizabeth Keague who are also featured in the group photo (front L->R respectively) along with Professor Sinead McGilloway, Centre Director.